history of the aircraft style trailer 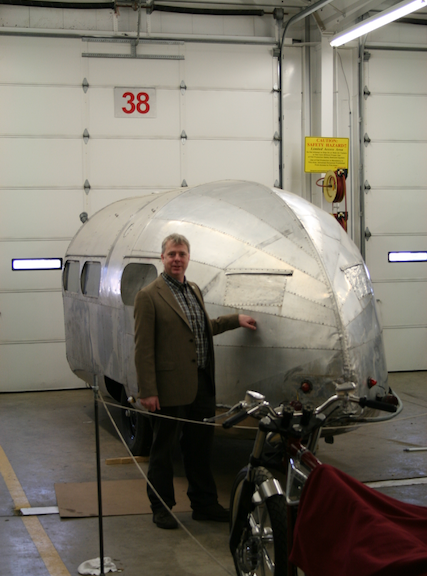 Miracles of industrial design they are called: the American riveted aluminum caravans (travel trailers/towables). First reported in the 1930’s and at its peak in the 1950s with about 200 different manufacturers. The design descends directly from the aircraft industry where William Hawley Bowlus built a streamlined aluminium trailer for his company Bowlus Teller: The Bowlus Road Chief. The same Bowlus was previously responsible for the construction of the historical plane, “The Spirit of ’76”. The first aluminum caravan had a strong cigar-like shape and a skin that was entirely constructed of lightweight aluminum riveted to a tubular frame. The door of the caravan sat on the drawbar. Thus William Hawley Bowlus is the creator of what we now call Aircraft Style Trailer. They are referred to in different names around the Globe. The Anglo saxan world refers tot them as Celebrity Trailers, Silver Bullets or Buck Roger Trailers.

The Great Depression in 1936 struck Bowlus hard, causing financial difficulties and he had to apply for bankruptcy. It was Wally Byam of Airstream who bought parts of the estate and took over the production of Aluminium caravans. The first aluminium Airstream was in fact a custom build Bowlus Road Chief. The first amendment Byam made was moving the entrance door. Airstream was founded a few years earlier and was know for his homebuild Torpedo trailers and the blueprints he sold. Byam developed the Airstream model Clipper in 1939 and was then forced to close down his own business because of the 2nd World War and the lack of aluminium.

During the war there was a shortage of aluminum – everything went to war industry. The whole caravan industry in the US, as well as many other industries, was at that time completely silent. Wally Byam began working for Curtis-Wright aircraft. The prewar Airstream Clipper has been improved here and built like Curtis Wright Clipper. In 1947, there was a problem about the commission Byam received and stepped on. Byam trailers were built first under his own name and later under the  Airstream brand. In 1949, Curtis Wright chucked in terms of RV’s and focused exclusively on the construction of aircraft. Inventory and equipment were bought in a management buyout by three gentlemen who start a new business called Silver Streak. Silver Streak has produced aluminum aircraft style caravans until late 1974. That explains of why the Clipper model exists in both Curtis-Wright, as Airstream and Silver Streak versions.

Byam had vision when he organized a meeting in 1951 for caravanners. He set up tours for bon vivants with an RV (recreational vehicle) lifestyle. A marketing event ‘avant le lettre’. It was the beginning of the Wally Byam Caravan Club International. Now the largest caravan club in the world with thousands of members worldwide. In the beginning open to everyone – it was later limited by the size of Airstreams to owners. Have become legendary ‘caravans’ organized to all corners of the world. The Cape Town to Cairo trip was partly recorded in a documentary. Actually, the establishment of the WBCCI and its success why Airstream has been granted the status of Industrial Heritage and Iconic Design.

Good example is followed, is a well-known proverb. Besides Bowlus Teller, Silver Streak, Curtis Wright and obviously Airstream at the pinnacle as many as 200 manufacturers were engaged in the production and sale of this type of caravans (RV’s). The best known are Spartan, Boles Aero, Streamline, and Fleetwood Avion. No manufacturer has survived independently. They were all taken over by builders of ‘ordinary’ white boxes caravans. Building aluminum trailers today, still happens  manually and is therefore technically not price compare to the regular sandwich panel construction. Real enthusiasts are uniting in a global club: Tin Can Tourists. The name of this club, of course, refers to the aluminum skin of most of the old-timers.

In the Netherlands FunTear started in 2006 with small-scale production of aluminum trailers. First with the Teardrop type trailers and later with full size trailers in retro style, tiny houses and wooden versions. All caravans are customized by FunTear on customer specific requirements. In 2014 a couple of entreneneurs rivived the Bowlus Road Chief and the Silverstreak brand came back alive in 2018.